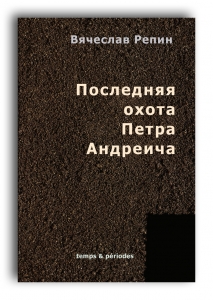 ‘The last hunting outing of  Pyotr Andreyevich’, was eventually published in Russia at the end of the 90s in several thick literary journals, and noticed by the critics for its ‘touchy’ subject.

“The Last Hunt of Pyotr Andreyevich” was written in Russian in 1992-1993. In the perestroika years the novella was published in “thick” Russian magazines and attracted the attention of critics and readers. The tragic plot is written in the style of classic Russian literature.

Storytelling theme: an episode of hunting in the Russian provinces, the vicissitudes of Russian life, the fate of a military man, caught in a vise between official duty and his conscience.

The book was translated into French (2010) by the talented translator Tilda Lovi. The French version is edited with great precision and taste, authorized.

the author about his story, fragment of interview (in Russian)

2010 This is a major text dealing with today’s Russia, in the face of existential problems of our age.

2008 The contemporary, realistic and philosophical novel about litterature and art, original French version.

The Stars’ Sickness or the Ripe Years of a Misanthrope, roman